Children’s Commissioner calls for playing out 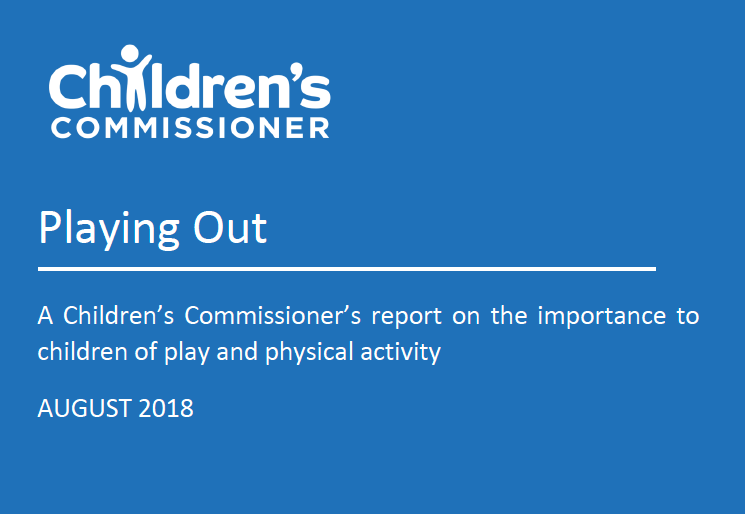 The parent-led Playing Out movement, along with play organisations and advocates, have long called on the government to support children’s right to play out in the streets and spaces where they live. From 2013-16 the Department of Health provided funding for a national street play project, enabling us to promote and support the temporary play street model across the country, but despite its success and proven impact, this project was not followed up with any longer-term strategic funding or policy support for street play. In fact, the government has been very quiet about play for a long time.

So we were surprised and delighted to see the report – actually titled “Playing Out” – published this week by the Children’s Commissioner for England. It makes a strong case for increased government support for outdoor play generally and street play in particular, echoing many of the arguments we and others have been making and emphasising the social, emotional and physical benefits of playing out for children.

Anne Longfield and Tanni Grey-Thompson introduce the report on a nostalgic note saying, “We all remember the long hot summers of our childhood with endless warm days playing out and having fun with our friends from dawn until dusk” but quickly point out that, “there can be no doubt that for children growing up in 2018 things have changed – a lot”. They acknowledge that children’s freedom to play out and to “roam” has drastically reduced due to a combination of, “busy lives, busy roads and fewer safe communal spaces” – to this list we would add reduced sense of community and increased parental fear. In contrast to the majority of media coverage, excessive screen-time is recognised as the inevitable result, rather than the cause, of children being stuck indoors.

The authors note that, as well as losing out on the many important social and emotional benefits of playing out, “Today’s children are the least active generation ever”. Arguing that organised, adult-supervised sport is simply not the answer for most children, especially those from disadvantaged backgrounds – often involving either a car journey, fees, or both – they ask, “So how can we turn the tide and ensure that play time isn’t consigned as an outmoded activity of the past, taking with it all its known benefits?” A parent-organised ‘playing out’ session

The report calls for practical solutions, political support and funding to bring about the systemic change needed to restore playing out as a normal part of children’s lives. The playing out or temporary play street model (called “Play Zones” in the report) is specifically highlighted as a do-able action that parents themselves can take, with the right support in place from councils and other local organisations where needed. Of course, this is music to our ears! Through parent-power and with support from Playing Out and local organisations, over 800 streets have already taken up the idea and 57 councils now have street play policies in place. We know that with strong government support, the play street model could be a powerful way to change things for children and communities everywhere.

Beyond this, we would very much welcome government engagement with the wider issues around children’s freedom to play out. National policies and legislation around transport, streets, planning and housing all need to address children’s right and need to play out and feel safe where they live. As Play England (our partner on the street play project) rightly says, “it is vital the Government takes notice of the recommendations of its Children’s Commissioner and acts now to tackle the health crisis of our children and young people”. We hope that this report is the start of a new attitude towards children and play, recognising that children have lost something vital and now is the time to restore it.