Children’s right to play is a matter of spatial justice

Wendy Russell posted this in Activism, Community, Street Space on 14/10/2020

On 8 October we held a webinar with writer and activist George Monbiot to discuss children’s freedom to play out, and the links between safer streets and climate justice. Here, researcher Dr Wendy Russell shares her takeaways from the conversation.

What I loved most about listening to George Monbiot – apart from his clear passion, depth of knowledge and eloquence – was how he connected children’s (in)ability to play out not only to the car, but also to communities, to political systems, to the global economy. This really chimed with my perspective that children’s right to play is a matter of spatial justice.

As a child, George played out on a rewilded golf course which was held in common by the community, with open access. Ecosystems had sprung up: trees across the golfing fairways and greens, bunkers filling up with vegetation. He felt part of that ecosystem, embedded in it.

He talked about ‘common space’ rather than ‘public’ or ‘private’ space, deliberately blurring boundaries of ownership and recognising land as a common resource. That one person can claim ownership and control of land was, to him, “anathema to the very concept of humanity in a supposedly democratic state”.

Control of who profits from the exchange and development of land happens through the planning process. This is a top down process in which children are invisible as they don’t buy houses. And that, says George, is just wrong. Although there is some good work happening, much residential development is still centred around the private motor car.

The car is the number one immediate barrier

Again – the car is the number one immediate barrier. Streets used to be multi-purpose but have become monocultural, places for driving through and parking. Space is taken away for anything else. Cars cut through the connections people make with others on their street.

Participation is vital for change

What we need, he said, is to move towards genuine community participation in decision over land use and design. In the UK, we’re not used to participatory democracy; genuine participation beyond polarising issues like parking and dog poo needs deliberate effort and support. A successful model for community participation requires multiple ways for people to participate frequently, starting with low commitment, low threshold ways that bridge across social diversity i.e. not just bonding with likeminded people in ways that exclude those who are different. 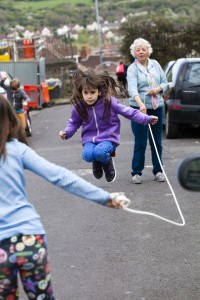 George highlighted the Playing Out model as an excellent example of community participation because there are various levels of involvement, from simply coming out into the street (with or without children) to being a steward or street organiser, to campaigning for local policy change. Plus, community connections and benefits spin off from this, building other ways to participate. This is the bottom up, change-making approach.

To build a vision, he suggested imagining the kind of world an omniscient embryo would choose to live in: it wouldn’t be one that was covered in tarmac, or one where most of the land was owned and controlled by a tiny number of powerful rich people bent on increasing their wealth. It would be one where we would design in common for the benefit of all, and where children were centre stage. A kind of political rewilding, perhaps.

Thanks George, for your insightful analysis of children and spatial justice, and thanks too for the encouragement for grassroots movements such as Playing Out and the links to practical ways to encourage participation. Thanks also to Playing Out for such an opportunity.

Wendy Russell is a Visiting Fellow at the University of Gloucestershire and an independent activist researcher into children’s play as a matter of spatial justice.

Children's Freedom Over the Decades

playingout posted this in ActivismChildren's play, health and wellbeing on 01/10/2012