Find out more
Home > Blog > Children's play, health and wellbeing > Why play is the key to children’s exercise

Why play is the key to children’s exercise

Alice Ferguson posted this in Children's play, health and wellbeing on 10/02/2021

Throughout lockdown, we have been calling for clarity in the rules that outdoor play counts as exercise for children, so that it is clearly allowed under England’s lockdown rules. It is very clear that adults can go out for a run or a bike ride and needs to be equally clear that children can go outside to play. This is particularly crucial while schools and sports clubs are closed. With more encouragement from Government, playing outside – in parks, streets, playgrounds and public space – could give ALL children so much of what they need to stay healthy and happy right now.

Even before lockdown, only 18% of children in the UK were getting the recommended 60 minutes a day of physical activity, with children from lower income households the worst affected. For years, public health officials have struggled to find answers to the question “how do we get children more active?”. Huge amounts of public money – around £2 billion since 2011 – have been spent on sports and PE provision, and the government has launched campaigns to try and sell the idea of exercise to children. None of this has made any real difference – in fact, the problem has only got worse.

But one very obvious solution is overlooked. Unstructured outdoor play is one of the easiest, most natural ways for children to be physically active in their daily lives.

The fact that play=exercise may seem obvious to those of us who have witnessed children during play street sessions or in the playground. Given the space and permission to play together freely, and some basic equipment, children are naturally, instinctively, joyfully active: running, scooting, cycling, skating, throwing, skipping – you name it! This suggests that children do not need encouragement in order to be active. They just need the right environment and freedom to do what they enjoy.

The idea that children have become lazy and are not interested in playing outside is both a dangerous myth and an easy scapegoat. Play streets show that when given the chance to play out together – and safe space on their doorstep – most children choose that over being indoors by themselves or on screens.

Let’s be clear: play is far more than just exercise for children. It is the essence of their being and the way they interact with the world and each other. But, without reducing play to something purely functional, we must recognise how vital it is for children’s physical activity, for all the following reasons.

Children do not need to be told, encouraged or made to play, they are intrinsically and instinctively motivated to do so because they enjoy it. According to Sport England, “enjoyment is the biggest driver of activity levels”, so this is hugely significant.

And, of course, as well as being a motivator, the joy that children get from play is an end in itself!

ALL children, regardless of ability, gender, ethnicity, ability, location or family circumstances, can and do play. Enabling children to play outside where they live would be the most accessible and fair way to tackle inactivity as it is cost-free, inclusive and open to all.

Because free play is child-led and by nature involves diverse activities and ways of moving and exploring, it naturally builds children’s physical literacy, skills and confidence, perhaps more than some other forms of exercise.

In a survey of play streets, we found that 85% of children either learnt or improved their physical skills through activities such as scooting, riding a bike (80%), skipping (66%) and roller-skating (63%). And a 2020 study confirmed that play streets support children’s physical literacy.

“Physically literate children do twice as much activity. The more of the five elements of physical literacy – enjoyment, confidence, competence, understanding and knowledge – children have, the more active they are.” (Sport England Active Lives. Children and Young People Survey 2019)

Outdoor play is for all children – not just the ‘sporty’ ones – which is another important reason to put it at the centre of physical activity strategies. But it can also be where the seeds of interest in competitive sport are planted at an early age, as many professional sports people have attested, including footballers Wayne Rooney and Fernandinho and Olympic cyclist Jason Kenny. Not all children who play out will go on to win a gold medal but many will find a way into a lifelong love of sport and physical activity.

Investing in and creating policy to support play not only enables children to be more active but gives them so much more besides. The value of play for children is so fundamental and wide-ranging, it has been enshrined in the UN Convention on the Rights of the Child.

And having the freedom to play out near home gives children connection with their local community and environment; growing independence and resilience; friendship and adventure.

Enabling outdoor play is largely a matter of creating more ‘active environments’ where people live – streets, housing estates and public spaces that are safe and inviting enough to allow people, especially children, to use them and move around freely. 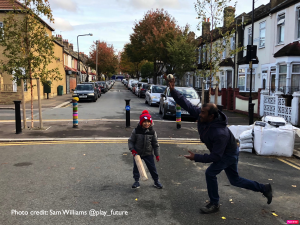 As well as giving children more freedom, creating these environments and reducing traffic dominance of streets benefits everyone in so many ways. It encourages more active travel (walking and cycling), social interaction and a sense of belonging. It makes neighbourhoods safer and friendlier. It reduces air pollution, allowing children to breathe clean air as they play out, walk or cycle. And it is an important step towards tackling climate change.

And if you are not already convinced, enabling children to play out where they live is also by far the simplest – and cheapest – way to get them moving.

Children do not need organising, instructing or even, from a certain age, supervising in order to play. They don’t need to go to a special place with expensive equipment or kit.

Essentially, in order to play out freely and actively with all the physical and emotional benefits that brings, children simply need time, easy access to safe space, permission and, ideally, other children to play with.

Play streets are one temporary way to provide those conditions and we believe they could be a big part of covid-recovery, for both children and communities. We are here to support that.

But if politicians and decision-makers really want to get children moving again, they need to look at what’s stopping them from playing out every day – and remove those barriers. That will take serious commitment and bold decisions. It will definitely mean tackling car-culture, something no politician wants to do. But the first step is simply recognising free outdoor play for the gold dust it is for children’s health and wellbeing (enjoy!)

playingout posted this in ActivismChildren's play, health and wellbeing on 05/01/2021