“Some of us have young families, some teenagers, some grandchildren and others only adult children.. But we all want to improve things for the whole community.”

How would you describe your street? 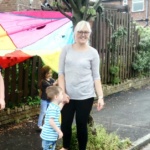 How long have you been playing out?

Almost exactly 12 months. Our first official Playing Out Session in the street was May 2018.

What attracted you to the idea of ‘playing out’?

I saw a BBC news video in November 2017 and it planted a seed in my mind. Our street has always been friendly, with neighbours nodding hello and exchanging pleasantries. But I knew that more could be done to build a sense of community and a safe space for children to play that didn’t currently exist. Once I’d seen the video it seemed obvious that the idea could work here.

How did you get started?

In the new year I approached a neighbour I knew and asked what she thought. She was right behind the idea so we organised a meeting later that month in the local pub and printed flyers inviting people to come along. It was really nerve-wracking taking that step. I had no idea how it would be received and if anyone at all would turn up. As it was, 14 people came along from all different generations! The rest, as they say, is history.

Who have been your closest allies?

Quite quickly it became clear that we were so lucky to have a core group of people who were excited by the idea and willing to get involved. Some of us have young families, some teenagers and grandchildren and others only adult children but we all want to improve things for the whole community.

How did the council respond to the idea?

Stockport Council already had a Play Street Policy dating back to 2013 but there is an absolute requirement for groups to hold Public Liability Insurance. This is a barrier we feel must have put many people off. We applied to the council for help with the cost of this and our local councillors have been overwhelmingly supportive so far.

What has been the biggest challenge and how have you overcome it?

Our biggest challenge has been meeting the cost of the required Public Liability Insurance. So far we have had help from the council but this is not a longer term solution for ourselves or for other Stockport residents, so we need to keep working on this too!

What has been the best thing for you or your street?

Without a doubt the best thing for me has been seeing friendships grow between both children and adults of all ages. The children all play in the traditional sense but the adults also engage in jokes, banter and supporting each other too. New residents comment on how welcoming and friendly the street is and we all help each other out, without living in each other’s pockets. Not everyone always wants to join in but anyone who does is welcomed with open arms.

This is the most difficult question of all – purely because there are so many to choose from. So, I put it out to our group and the top three are (in no particular order…):

Residents from age 93 years – 6 months cheering on England v’s Panama at football with the TV set up on someone’s driveway.

Halloween! Teenagers on the street kindly helped carve pumpkins designed by children. We  used them to decorate the street for visitors.

My own personal absolute favourite moment of the last twelve months came not from an organised Playing Out session but from an impromptu ‘Snow Day’. The schools closed and children (and adults) emerged to build snowmen, throw snowballs and sledge together. Even the youngest children automatically moved off the road at someone’s call of “car!” and we all retreated inside together for pizza and hot chocolate at lunch time. The snow really did seem to bring a sprinkling of nostalgia and magic that day.

Any tips or advice for others?

The best advice I can give is that no-one can take on organising everything themselves. Ask for help and accept that this is an extra to your lives: if it gets done, great, and if not then don’t worry. Also, meetings in the pub are very important!

What is the one bit of advice you wished you’d had before you started?

Don’t worry and just go with the flow. Some sessions will be busy and others just a core group of die-hards and there is no way to predict how each session pans out!

Where did your motivation come from?

I suppose that my main motivation was hoping that our children could have some of the same freedoms and experiences I had as a child, including some exposures to ‘risk’ so that they could learn to manage those risks. I have also come to realise that my motivations have evolved to include building up my own support network locally: we have so many neighbours in different situations, it’s nice to know there is always someone to call on for an emergency cup of sugar (or corkscrew!).

Finally, what do you hope the Playing Out movement will achieve?

I hope we can reach a point when we don’t need Playing Out in the formal sense any longer. Where it is as normal to see children out playing as it is birds in the sky.

Holly’s street in Stockport is just part of the action taking place around the UK, led mainly by parents and supported by forward thinking local authorities and community organisations. .

Want to start playing out more and be part of this change? See our Four Simple Steps or check out other ideas to support children’s freedom.

Would any of this stuff make it easier?