Start on your street

“If I can do this, anyone can! I only came to this country from India 11 years or so ago, so I am very proud of what I have done on my street!” 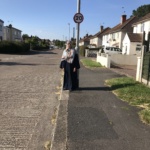 How would you describe your street?

How long have you been playing out?

What attracted you to the idea of ‘playing out’?

Meeting my neighbours and freeing my kids to play outside! I’m a volunteer with a Muslim charity and community integration is very important to us. My children’s primary school held a Playing Out session and this gave me the idea to try it myself where I live.

How did you get started?

I’d already organised coffee mornings for parents at my local community centre and had met Sam a support worker from Bristol City Council. She helped me to organise a first informal meeting on my street, outside on the green patch, to talk about Playing Out. We went and knocked on doors and lots of people came out. We all agreed we wanted to try it! After that, we just followed the process on the Playing Out website and used all the template letters. This helped us to know we were doing it the right way. Sam helped me to fill in all the forms to make it happen and came along on the day. From the third session onwards, I just did it myself.

Who have been your closest allies?

Sam from the Council and also Daniella at Playing Out helped me a lot. I don’t think I could have done it without this help.

How did the council respond to the idea?

Luckily I live in Bristol where the idea of parents closing streets for play began, so the council already had a good policy in place. But I got good extra support from Sam at the Council to actually make it happen.

What has been the biggest challenge and how have you overcome it?

Apart from needing help to get going, the biggest challenge was when we had an angry driver who wanted to come through. My husband tried to explain it all to him and then the driver just started being racist. But my neighbours stood up to him and rallied round us and we felt very supported.

What has been the best thing for you or your street?

I actually know people on my street now and support can come out of this, like with the incident above. I feel more confident where I live. And I feel like people see me as belonging more. I also want to raise my children to be active British citizens and to understand how they are responsible to society and society is responsible to them. Playing out has really helped with this.

Seeing the children playing freely and loving it! They scribble with chalk on the street and they cycle up and down. I think they feel empowered too. When the day comes around, three boys from a Pakistani family over the street come over to help my children to get all the cones out!

Where did your motivation come from?

Belief in the importance of people getting to know each other and all the good things that come from this.

Any tips or advice for others?

Ask for help from the council or from Playing Out or another organisation if you need it. And if you are a council or local organisation, offer help to residents! I’ve talked to other people in my charity and at least 10 other parents have told me they want to do it where they live but there is no support locally.

Also, I’d say if I can do this, anyone can! I only came to this country from India 11 years or so and I was not born and brought up here. So I am very proud of what I have done on my street.

Finally, what do you hope the Playing Out movement will achieve?

If people of different ethnicities mix together, there will be less judging about each other’s beliefs, less racism, more understanding. And this is true for our children playing together too. We need this more than ever today. Organising Playing Out sessions is a real way to build bridges.

Huma’s street is just one of many play  streets around the UK, led mainly by parents and supported by forward thinking local authorities and community organisations.

Want to start playing out more and be part of this change? See our four simple steps or check out other ideas to support children’s freedom. Please see our Support for Bristol play streets page if you’re a parent in Bristol who wants to organise a play street and would like some help to get started.