Riding bikes and playing out: joining forces with British Cycling

In September, we launched an exciting joint campaign with British Cycling, supported by Olympic gold medalist Jason Kenny and the Children’s Commissioner for England.

The campaign aims to encourage many more parents and neighbours to take up the ‘playing out’ model in order to reclaim their streets and estates and give children the chance to cycle and play out freely. We also want all local authorities to get behind this, following recent endorsement and guidelines published by the Government. Here’s more information followed by actions you can take:

Wheels on the Street

Ingrid from Playing Out, 1970s Nottingham

Do you remember learning to ride a bike and free-wheeling around your street or neighbourhood? In the words of Playing Out parent-activator Barney from Hackney, “As a child, my bike was my exercise, my freedom and my independence”.

It’s not surprising to learn that this is not happening so much anymore. According to a survey just commissioned by British Cycling, whilst 92% of parents used to ride their bike on local streets as a child, 76% said they feel it is less safe for their child to do so because of traffic danger. Because of this, many feel unable to allow their children the freedom they had as children.

This is not ‘cotton wool parenting’ –  the danger from traffic is real.

How Playing Out can help

The good news is that among parents whose children could not ride a bike, 88% said they would teach them if their local streets felt safer and 94% said they would if it was easier to get to safe places to cycle. 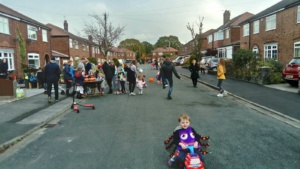 The ‘playing out’ model –  regular, resident-led play streets – came out of parents feeling concerned and frustrated about exactly this: that cars had gradually taken priority over children’s need to play outside our homes. It was a way to temporarily reclaim the space on our doorstep for children to have that very simple experience of playing out together, as well as creating a vision for the future. The idea started on one street in Bristol but has spread to over 950 streets across the UK.

This has already had huge, positive outcomes for children and communities. An important one is that it has been a safe and stress-free way for many children to learn to ride a bike for the first time and to gain confidence cycling on the road. We have heard many great stories about children learning to ride using another child’s bike during a playing out session, or even being taught by someone else’s parent. Together with British Cycling, we hope to enable many more children to cycle and play out where they live.

Take action so children can cycle and play out 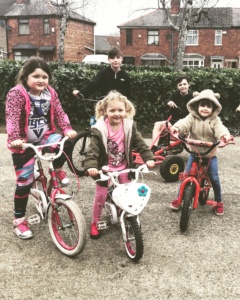 Find out more about how to start playing out sessions on your street.

You can find out if your council already has a play street policy here. If they don’t, you might want to write to your local councillor using this template letter and ask them to get on board!

For more info about the collaboration between British Cycling and Playing Out, see here.

Let’s change things together for children and get wheels back on the street!

Children's Commissioner calls for playing out