Daniella Radice posted this in Uncategorized on 20/03/2019 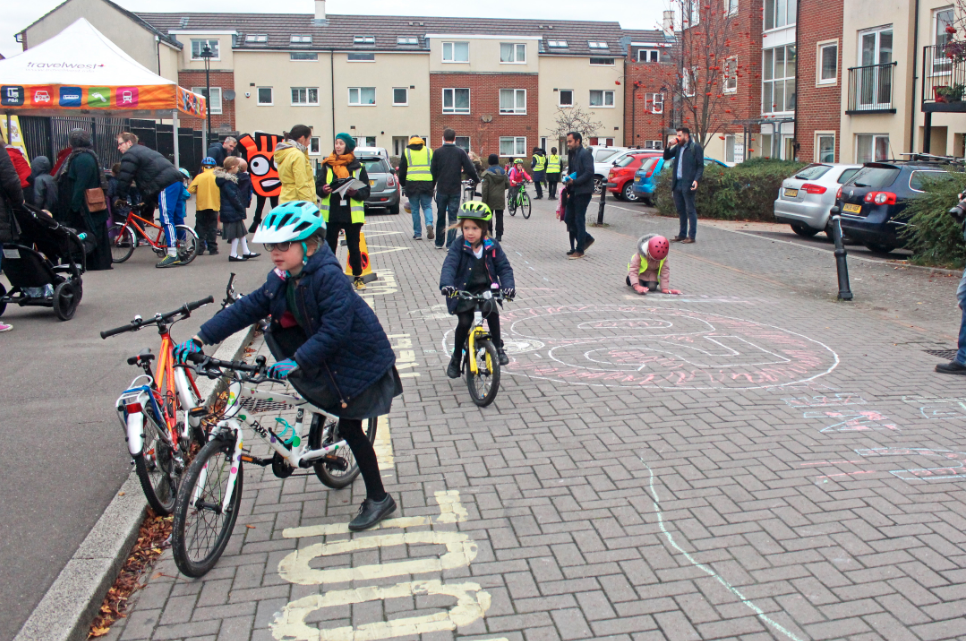 Over the past few months, one aspect of the street play movement has grown in popularity: school streets and school play streets. This interest has been fuelled by increasing concerns about air pollution, on top of parents’ frequent worries about road safety outside schools. Mums for Lungs and the Clean Air Parents’ Network are both campaigning for school streets. Friends of the Earth have written this excellent campaign guide for residents on how to persuade your council to put school streets in place, (with thanks to them for much of the information on school streets below).

Playing Out is working with Sustrans to support temporary school play streets across the UK for the Big Pedal starting on the 25th of March, and there might be one happening near you!

Playing Out and Hackney Play Association have both been supporting street play sessions outside schools for a number of years. These have been hugely popular with both parents and schools – and children! – as a fun way to promote the need for safer streets around schools. Here is a film by Hackney Play about school play streets.

Unlike normal play street sessions, which are normally organised by residents on their own street, school play streets are a collective effort by the whole school community. Parents and residents support the school in organising it, and it can be either a one-off or regular occurrence.

As with a residential ‘playing out’ session, the street is temporarily shut to traffic after school for an hour or two, stewarded by volunteers. But because it tends to be a larger event with more children, there are some important differences in the way it happens. In particular, it may be sensible to close the road to cars completely, rather than allowing vehicle access for residents. Hackney Play Association have written this great guide for anyone interested in school play streets.

Seeing the streets filled with children is a powerful thing and can really start to shift the way people think about their right to play in streets and public space.

“I felt an immediate affinity with the aims of Playing Out. They matched so well with what we are achieving here at Luckwell – a real sense of community belonging and responsibility for our staff and pupils, which is something we see as very much an investment in all out futures. We look forward to holding more such events.”

Following the success of school play streets, Hackney and several other councils realised that limiting traffic around schools on a permanent basis can have many brilliant effects, transforming hectic, congested roads into a safer and more pleasant environment for all.

The council-led “school streets” model closes the road outside schools at the start and end of the school day, using bollards and/or cameras.

By making a safer, cleaner environment, school streets increase the likelihood that children will walk or cycle (and parents leave their cars at home).

The preliminary findings from Hackney and Camden councils point to School Streets having a positive impact for children, including:

For more information on how your council can get involved visit: Sustrans – Taking Back School Streets.

What is your council doing?